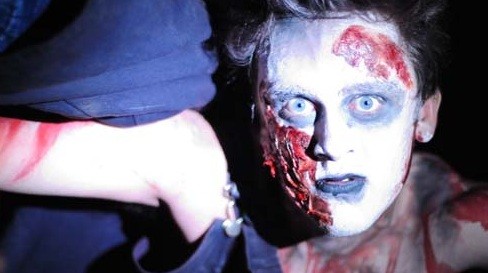 This Halloween the Hop Farm brings back Freak Week, winner of the 2011 Screamie Award for the best seasonal scare event for a small venue. Following the irrefutable success of last year’s event, the Hop Farm is thrilled to introduce three new attractions to the week-long event, including a world first, to be revealed at the end of September.

Raising scare tactics to the next level, Freak Week brings an element of immersive theatre into traditional Halloween entertainment. Enter The Slaughterhouse, Quarantine, The Funhouse and The Underground – if you dare!

Porky’s Pie Factory just outside East Peckham, Kent, was closed by hygiene inspectors in 2008 after reports that human remains were found in their pork pies- but strangely smoke has been seen coming from the factory chimney ever since. Stories and urban myths of this derelict building have been circulating for many years. Some believe it’s a human slaughter house, where victims are served in meat pies. But this is of course all just rumour. Brave visitors will find heart-stopping surprises in every chamber of this thrilling maze – will you escape the dark twisting corridors…or become the next blended and seasoned victim?

Warning: The Slaughter House is not suitable for visitors who suffer from claustrophobia and features strobe lighting. Features live actors and loud noises.

A virus has spread throughout the country. Humans are sick with rage and are roaming the streets – the zombies are looking for victims to feed on. To stop the virus from spreading globally, government officials are urging members of the public to seek medical help. You are invited to take an anti-virus drug in a special quarantined government medical centre. But be warned, things won’t go according to plan…

Warning: This is a show and live action horror maze, containing smoke effects. This attraction is not suitable for anyone with a heart condition. Visitors will need to move quickly through the maze, so please do not enter if you are unable to lightly jog.

A closed children’s attraction at a Paddock Wood family park, known by many as ‘The Fun House’, has become infested with squatters. Reports are flooding in of a so called ‘gang’ from a recent carnival which toured the area having acquired the space. They have been described as aggressive and are refusing to vacate the area. The Fun House was closed in 2001 for repair and maintenance work, which due to a lack of funding was postponed. Since its closure over 10 years ago, it has been slowly deteriorating, with many locals branding it eerie and unnerving.  Staff from the attraction are taking it in turns to hold a 24 hour vigil at the location since the gang arrived.

Warning: The Fun House is not suitable for visitors who suffer from a fear of clowns and features strobe lighting.

An underground torture facility has been discovered in the heart of Kent, in the dark tunnels that once were part of the Lilly Hoo underground station – huge numbers of missing people from Tonbridge and Malling are thought to be inside. Lilly Hoo underground station was closed in 1947, due to traumatic damage during World War II. It was used to transfer goods and service men from Tonbridge during both world wars as well as an air raid shelter and makeshift hospital wing. Police are trying to access the facility but due to high danger are calling for further backup.

Warning: The Underground is not suitable for visitors who suffer from claustrophobia and features strobe lighting. This attraction is pitch black with loud noises.

Freak Week attractions are not suitable for children. Children under 10 will not be admitted. Teenagers under 15 must be supervised by an adult. Please refer to the website should you suffer from medical conditions which may be affected by special effects. Attractions feature live actors – actors will not touch you, please do not touch them.

For further details on other events taking place at the Hop Farm throughout the year visit www.thehopfarm.co.uk

Posted by admin in Culture.Tags