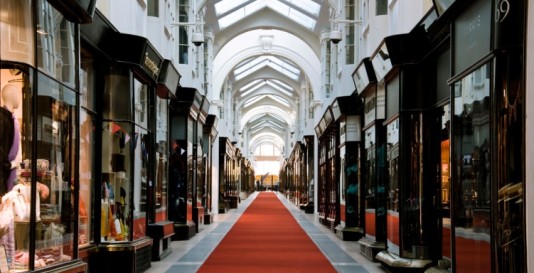 Mayfair’s world famous Burlington Arcade prepares itself to showcase a union of the highest quality British design and craftsmanship. For the first time in history, a highly anticipated secret design is set to replace the traditional 180-metre carpet, which runs the full length of the arcade.

The fruit of a collaboration between internationally renowned bespoke furniture and interior designer LINLEY, and 200-year-old Royal Warrant holding carpet manufacturers, Brintons Carpets, has been commissioned to welcome international visitors to London’s most iconic shopping arcade.

Following a year when the eyes of the world were on London, thanks to the Queen’s Diamond Jubilee and the London 2012 Olympic Games, shops in Burlington Arcade celebrated a 42% increase in purchases from international visitors, helping to cement its position as a worldwide shopping destination.

Keeping the international spotlight firmly on London’s famous shopping experience, Burlington Arcade has commissioned these leaders in exquisite British design, to create a brand new, bespoke carpet that will run the full length of the longest and most beautiful covered shopping arcade in Britain.

The unique design is being closely guarded until its official unveiling at a special event at Burlington Arcade in June 2013. However, it can be revealed that the focus of the design will be to welcome international visitors to the luxury landmark, whilst acting as a showcase for British creativity, wit, design and manufacturing.

Nestled in the heart of Mayfair, Burlington Arcade has been heralded as an historic and architectural masterpiece, a luxury landmark in London ever since it was first unveiled in 1819. As one of Britain’s first shopping arcades, it continues to lead the way in retail trends from timeless collectibles to more contemporary style and design.

LINLEY, who recently opened a store in Burlington Arcade, was keen to add a new dimension to the shopping experience. Founded by David Linley in 1985, the brand has now become a byword for excellence in British craftsmanship. Specialising in the design and production of furniture, upholstery, interiors and gifts of a superlative quality, LINLEY enjoys prominence in both retail and bespoke business.

The design will be manufactured by Brintons Carpets, who after being granted a Royal Warrant in 1958 in recognition of supplying carpets to Royal residences, have since gone on to work with revered brands, including Vivienne Westwood, Manolo Blahnik and Claridges . The unveiling of the carpet will be one of several major showcases for the company’s work in 2013. In July, Brintons will join 200 other companies granted the Royal Warrant of Appointment to showcase their products at The Coronation Festival in Buckingham Palace Gardens, to celebrate the 60th anniversary of HM The Queen’s Coronation.

Ellen Lewis, Marketing Director of Burlington Arcade, said: ‘We asked LINLEY to consider our increased number of international visitors when developing ideas, and the design they have evolved is something that will certainly give international visitors a distinguished British welcome. We’re very excited to see it unveiled in June.’

David Linley, founder of LINLEY, commented: ‘This is the longest and most complicated carpet we have ever designed. So far, it has taken us around 250 hours to design, and comes from an enduring affection for Burlington Arcade. We are proud to have been part of this landmark project that adds a touch of the LINLEY signature to a unique and historic London destination’

Sarah Draper, European Marketing Manager at Brintons, said: ‘We’re delighted to have worked so closely with LINLEY and Burlington Arcade. As UK manufacturer, it’s a great way to showcase and celebrate British design and craftsmanship to an overseas audience, something which all British manufacturers along with the government are looking to achieve.

For further information / Use of pictures / Interviews